An East Coast Raid – The Aftermath

In the group’s last blog an account of the Zeppelin raid was told. In this, over final blog of the series, the aftermath of the raid will be told over the following days and months.  The newspapers of the time gave little detail of the raid and therefore accounts of the raid are limited to the few private accounts of the period available.

By 11.30pm the Zeppelin had finished dropping its bombs over the town but would later head inland to drop bombs on Hotham before heading out to sea at 12.12am. The immediate aftermath turn towards freeing the wounded from wrecked buildings and extinguishing fires caused by the scattering of incendiary bombs. A letter dated the 12th August details the immediate aftermath of the raid over the following days. By the 11th the repairs of the bomb damage had begun:

“All are now white boards, nailed up”

The loss of life as a result of the raid would continue to grow in the days after the raid. Two young girls and the visitor to the Ramsay house died in the days after the raid. When considering the extent of the damage to the town and the loss of life some consideration should be given to the fact that not all of the bombs dropped on the town exploded. On the 12th August 36 unexploded bombs were displayed at the police station.

On the 12th an inquest was held into the raid and then consideration was given to burying the dead. Mrs Acaster (Mrs Ramsay’s visitor), from London, was buried in her own grave. The remaining victims were buried in a mass grave on the 13th; at the expense of Comptom Rickett.

The next account we have of the raid is taken a year later when the Goole Times reported the poor condition of the grave. Councillor Cluff drew attention to the dilapidated condition of the graves of the victims and asked which authority, the Council or the Joint Burial Board, was responsible for the upkeep of the graves. The cemetery authorities said it was the matter for the Council. In 1915 the Council undertook to defray the expenses of the funeral and the plot of ground was given by the Burial Board. No other obligations were known but it was thought that Burial Board would undertake the work. It was resolved that the Burial Board would take on responsibility for the upkeep of the grave.

As the end of the war came into sight the thoughts of the town people were given to remembering those who had been killed. In December 1918 a War Memorial Committee was established to discuss and decide upon the methods of memorial which would be suitable for the town. From the outset one of the matters raised was that any memorial should make reference to those killed during the Zeppelin Air raid. By January 1919 after a period of public consultation and several committee meetings a list of 13 schemes were considered. One of those which was chosen, as a subsidiary to a larger memorial, if funds were available, was a monument for air victims over the grave in Goole Cemetery.  The funding of the memorial scheme would be by public subscription.It would take two years of funding raising and disputes but in February of 1922 a ceremony to the Civilian casualties of Goole was unveiled. The memorial was supplied from the design of the committee by Mr H.O Tasker, of Goole, who also erected the cenotaph. The memorial was placed in Goole Cemetery over the graves of the 16 persons who lost their lives in the German Zeppelin raid.
On the 12th February an unveiling ceremony took place in the town. The service took place on a Sunday afternoon with a large crowd forming at Goole Cemetery. The ceremony was designed to be of the simplest possible character but impressed and was said to appeal strongly to the many relatives and friends of the deceased, and sympathisers.

A procession to the memorial was formed at the cemetery gates headed by the Vicar of Goole and representatives of the Goole Churches. Then followed a choir selected from the Goole Churches led by Mr Ernest Johnson. Then came the relatives of the deceased, who had positions allocated near the memorial. Following these were the Chairman and members of the Urban District Council. As the procession moved along the cemetery path the choir sang “Rock of Ages”.

On arrival at the memorial Rev F. A. Young (Goole Primitive Methodist) read the lesson from Isaiah IX and XI and a hymn. A prayer by Rev. Father Dekkers and a hymn by the Roman Catholic Choir followed. Praise was given to the memorial committee by Mr R G Bickerton when asking Mrs Needham to unveil the memorial. Mrs Needham unveiled the memorial by releasing the Union Jack and gave a speech which stated that the memorial was a sign of the sincere sympathy of the fellow townspeople of those who were victims of terrible atrocity. Councillor S G Bevan placed a wreath at the foot of the memorial from the members of the Goole Urban Council and Mr R G Bickerton one from the Memorial Committee. These offerings were followed by others from the relatives of the victims. The choir sang the closing hymn – “Peace Perfect Peace”, after which the Bishop Illif pronounced the Benediction.

The impact upon those witness to the horrors of war would last for years to come after peace was declared. The physical legacy of the raid would also leave an impact in the years after the war. Although some account of the number of bombs could be given for those that were dropped on land there was no accounting for the numbers of bombs dropped in the docks. In May 1925 a dredger brought to the surface a German bomb, but thankfully did not detonate. 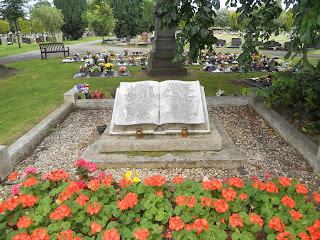 In memory of the citizens of Goole who lost their lives by a German Zeppelin raid on this undefended town on the August 9th, 1915.

“Eternal Rest Give Unto Them O Lord” 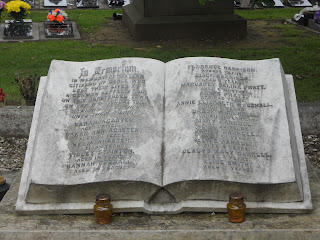 An East Coast Raid – The Attack

In the group’s previous blog the censored version of the Zeppelin Raid on Goole was explored. In this, our second blog, in the series a real account of the raid will be explored. The following account is based on an official report from the period and a letter written by a Mr West (Shipping Clerk at Lancashire & Yorkshire Railway Goole Steam Shipping) to his daughter.
At 11.10pm on the 9th August the Zeppelin was approaching Goole, which was showing lights, and by 11.15, following the river, reached the town. An empty goods train was travelling across Hook Bridge as the Zeppelin approached the town. The Zeppelin dropped three incendiaries just east of the bridge and two fell into the river:

“The Zeps came at 11.15pm Monday. Hook Bridge, got the first. They tried hard for bridge, dropping 3 bombs, but all missed – they are all at the bottom of the Ouse.”

The Zeppelin then flew over the town from East to West, dropping eight H.E bombs and 13 incendiaries on the town and docks. Ten houses were demolished and several other houses were badly damaged by explosion and fire, a dozen persons being buried in the debris.
“Many dropped between bridge & Goole, but, striking soft soil, never exploded…”

“One fell at Jessie’s back, onto the Kelsey’s garden, that didn’t explode, luckily; the next struck a house in Axholme Street, passing thro’ roof, & I can tell you the deep booming roar woke me & our room was one red glare – all Shuffleton seemed to be ablaze. Ma thought it was thunder, & lightning. I kept quite cool and resigned – it was an incendiary bomb, but the fire was put out. The next fell thro roof of Mrs. Acaster, the stone house, next to our butcher’s – four were sat at supper and 3 killed: Mrs. +2 daughters, a visitor escaping. Another fell just opposite this one, the other side of Victoria Street, next to Clarkson’s shop & next to where Mrs. Ellis went to live; it crashed thro roof & was an incendiary, but fire was put out…”

“Then came some demons. One fell in George Street (Back) – 3 houses had wall blown out into the lane…4 killed. Pa, Ma, 2 children – Mr. Gunnee carried girl out, all flesh, of one leg torn away – next he fetched a young baby, but the sight finished hum; he was done…sick…he went away…to vomit… Next fell in Ouse (Back) near T.K. Willson’s baker. Hole in wall, driver horse & cart thro’ – floors are all down in the cellar…”

A large shed on the dockside was badly hit and in Aire Street was badly damaged by the blast.

“Next fell in Ouse (Back) near T.K. Willson’s baker. Hole in wall, driver horse & cart thro’ – floors are all down in the cellar…Next a beast came, for destruction to property, tho not to life, fortunately. It struck the Quay Wall, just opposite Adam Street end. Stone blocks 2 feet thick, were splintered, and the solid masonry under them. Docks hydraulic pipes broken, log wood sent flying, Railway wagons derailed & smashed to pieces – Lowther Hotel hasn’t a window left, all blown out…& so is all Aire Street, Hoppers, Makintosh, Murdock, right to Armitage & Timm’s. Our office end windows broken & so are Brook’s Bank…Next fell on out Hamburg shed; it smouldered some hours and them burst into flame, at 6.00am. Most is destroyed, shed and contents. Another fell near, into a wooden shed, & blew it to pieces, scattering goods, slates & planks in all directions. Next fell on the coal sidings, just off Bridge Street. Could you have seen result, you would know what a crater is; it made one. A loaded coal truck, 14 tons, was shoved off the line, both rails broken thro & bent inward, aye split lenghtwise…An N.E.R. truck knocked into fragments, & one of our butter vans smashed…More fell near Alum Works, where similar craters were made , and minor damage done. We shall never know how many, some are at the bottom of the dock…”

An incendiary went through the roof of the Exchange but did no damage. The effect on the town’s people was one of shock and panic:

“I have talked to a man who was in a small boat, at the time, near a coal hoist; he did not know where to turn for safety, they seem everywhere…”

“But you should have seen the fugitives fleeing. Mount Please was swarming; swarming. The Harrison slept on the barge ground, there. See a barefoot woman, only nightdress on, a baby in her arms, & 2 children pulling at her.”

The Zeppelin continued to travel westwards dropping 16 incendiaries, which fell between the Lancashire and Yorkshire Railway Sidings and the North-Eastern loop line between the docks and the Dutch River Bridge, causing no damage. The Zeppelin would continue to drop bombs throughout Yorkshire believing heading out to sea at 12.12 am.

The panic continued throughout the night and into the following day:

“All flocked out, too, on Tuesday, at dusk, but better prepared. Men & women, bairns & baskets, chairs and stools; aye and even beds were taken out to field and hedge side, road and lane, seeking safety”.
The fires were speedily bought under control but as a result of the raid one man, nine woman and six children were killed. Two women were seriously injured and two men, two women and five children less seriously injured. All were persons in poor circumstances and all the men were civilians. The visitor to Mrs Acaster’s would also later be confirmed dead.

In the final article of the series the aftermath of the raid will be examined.

With thanks to the Yorkshire Waterways for the images.